Breakfast this morning at the private albergue in Santa Irene, and then it’s ponchos again.  Laurie (now this is the new Laurie . . . soon I’ll see Fort Collins Laurie, Laurie D.  I think this new Laurie is Laurie W.)  and Salvadore leave at about the same time I do, and we walk together most of the way to Monte De Gozo.  Laurie has LONG legs, so she goes faster, while Salvadore and I mosey along.  The rain stops after three hours or so, and everything is easier after that.  I’ve decided I definitely will stop in Monte de Gozo today, about 18 km from Santa Irene, and less than 5 km from the Cathedral in Santiago.  I want to “walk in” rested, and it’s supposed to be fairly nice tomorrow.  At least no rain for a day or two.

This stretch isn’t fabulous visually, but there are a few sights that catch my eye:

Don’t know exactly what it is, but I liked it, especially against the oncoming blue sky

Someone’s very well-made little altar, complete with arrow and a figure inside the wooden cage

Salvadore and I walk a bit behind Laurie again, but I know we are heading toward a good place to get some food.  Just before we turn off the road, we see this man . . .

Someone on a very slow “camino” He must be 90, but walks at a slow, shaky but steady pace, and his own stick

I head toward the Casa and restaurant, but Salvadore checks with the man to see if he needs help.  A very considerate gesture, but the man looks like he’s doing fine, and he probably walks this road every day.  He pretty much tells Salvatore this and thanks him, I imagine.

And as I approach the Casa de Santiago (?) , I see this familiar sign:

A familiar sign . . . but now I will see many of them, leading all the way to the Cathedral in Santiago

Finally, I get my large salad and some orange juice, and oh, yes, some Tarta de Santiago.  An excellent lunch.  Several small groups of pilgrims stop here for the last real meal before the final little push to the end.  Laurie has heard about a Polish albergue in Monte de Gozo and she is determined to find it.  No one seems to have heard about it but a week or more ago, she met two older women, sisters, who are headed there, and one of them has a daughter who will be a hospitalero there for awhile.

We continue our walk, and along the side of the path, I see what seems to be an empty cardboard candy box, red and white with a bluebird in a circle in the middle.  I am about to make a comment about littering when Salvadore says he thinks it’s a cell phone.  I stop to look and it is definitely someone’s phone.  So I pick it up, much like I picked up that women’s Keen Sandal on my last Camino.  Not sure how I’ll find the owner, but perhaps someone will walk back to see what happened to it.

Just like the Keen Sandal incident, Laurie has asked a group of women ahead of us if any of them lost their phone.  No, no, they all claim.  No one has lost a phone in this group.  So she continues to walk, but the group is waiting for us as we approach.  “Are you the people who found the cell phone?”  one of them asks.  “I think it’s mine.”

“What color is the case?” I say.  “White and red and blue,” says the woman.  So I hand it to her, she hugs me joyously and with great relief, and wants to have her friends take a photo of us.  Really “Deja Vu all over again” as they say.  Now we are all walking in a group, and we come upon the concrete Camino statue I’ve been waiting for. We take turns photographing one another. 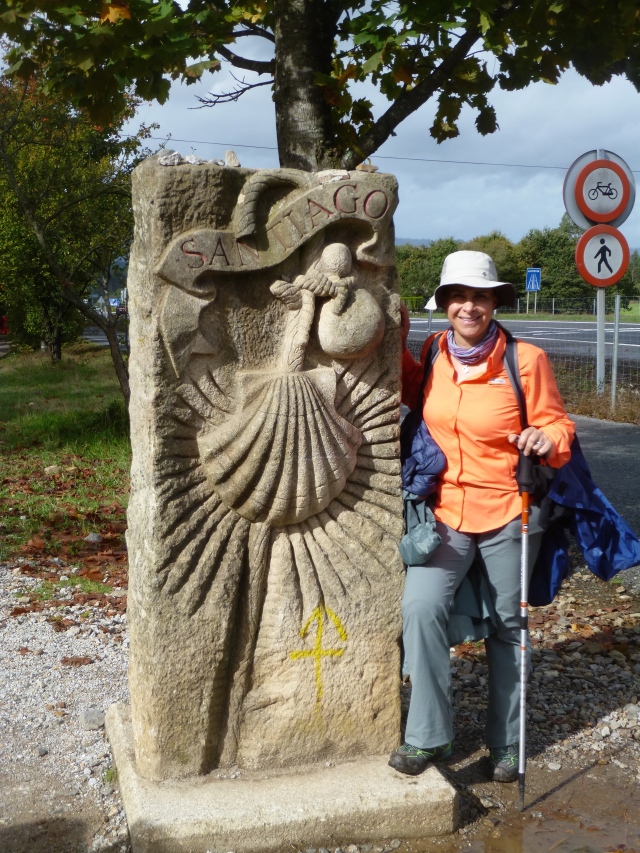 She lost her phone on the path. I spotted it, Salvadore recognized it as a cell phone, and here she is, a happy walker again . . . 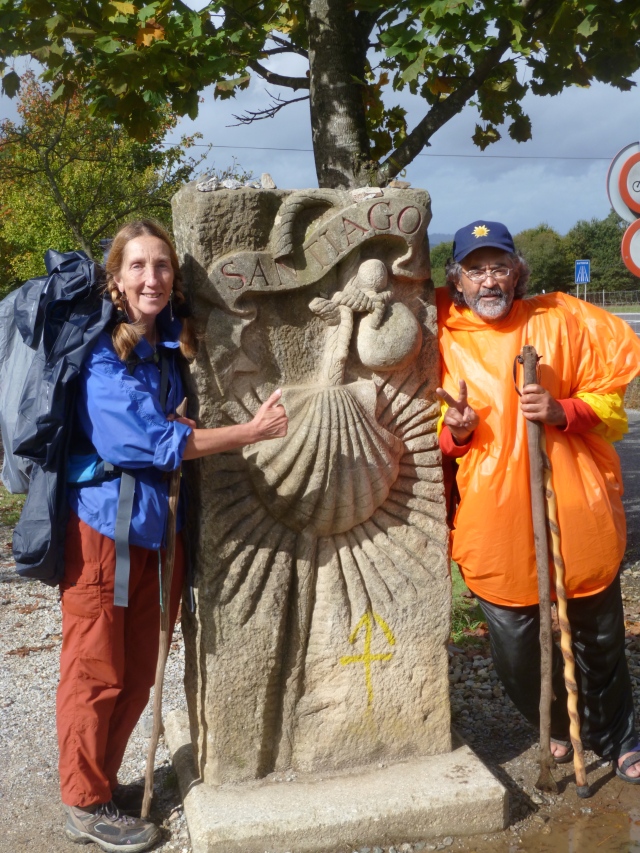 Here I am. Same statue, different clothing, different year, but a happy peregrino., arms brown like a farmer’s

We are nearly to Monte de Gozo and haven’t seen anything about the Polish albergue.  Laurie is far ahead of us now, but finally, just before the huge old Monte de Gozo albergue is a small sign that points left “200 m” indicating the place we’re searching for.  Laurie has already been there, signed up the three of us, and left her pack and poles, apparently to come looking for us on our way, but she took a “short cut” which completely missed the road we were on, so she and Salvadore played about a half hour or more of hunt and peck, hide and seek before they were reunited in our little bunk room.  And the daughter who is to be the hospitalero is a young woman whom I met in the Arzua albergue two nights ago.  Small world.

So tomorrow we will arrive.  I always remember the quote , attributed to everyone from Robert Louis Stevenson to the Little Prince, but it doesn’t matter who said it.  “Perhaps it is better to travel hopefully than to arrive.”  Last time I did NOT want to get to Santiago.  Didn’t want my walking to end.  But this time, I’m ready.  Ready to write and stay in my own little room at the Seminario Mayor, ready to find a laundromat to wash ALL of my clothes.  Ready to see Laurie D’Audney, my long-time friend from Fort Collins, who will arrive on the weekend from walking the Camino Frances.  Ready to meet up with Ria again, who has gone to Finisterre and will be back in two days. And I am still amazed that I made it, walking on the Norte.  But here I am.  Yay for me . . .

The monument at Monte de Gozo