On the road from Deba through Guernika to Bilbao

Posted on September 7, 2015 by Woodswoman

Thursday, September 3, 2015.  From Deba, I skip quickly past Markina (see a pilgrim getting off the bus in Deba as I get on, and two more young pilgrims joining me in Deba to points west) and walk for  two or three hours up to the Monasterio de Zenaruzza.  Though the little town names are getting shaky in my mind, I think this is the day I walk through Bolibar . . . the home of Simon de Bolibar (Bolivar as we learned in history class.)

The Monasterio was on my list, recommended by several summer Norte walkers, as well as the guide book with which I still have a love-hate relationship.  The two Danish women, Inga and Bodil, (the ones who thought they were the oldest until they met me . . . ) pass me and say they are heading up there as well, but when I get to the Monasterio and walk around to find the entrance, no one is there.  I ring a bell at the gift shop (of course) and a plain-clothed priest greets me, surprised I am alone.  I try to explain that two other women were supposed to be here, but he just shakes his head.  I am shown to a room with a kitchen sink, a table, cupboards, and four sets of bunks. 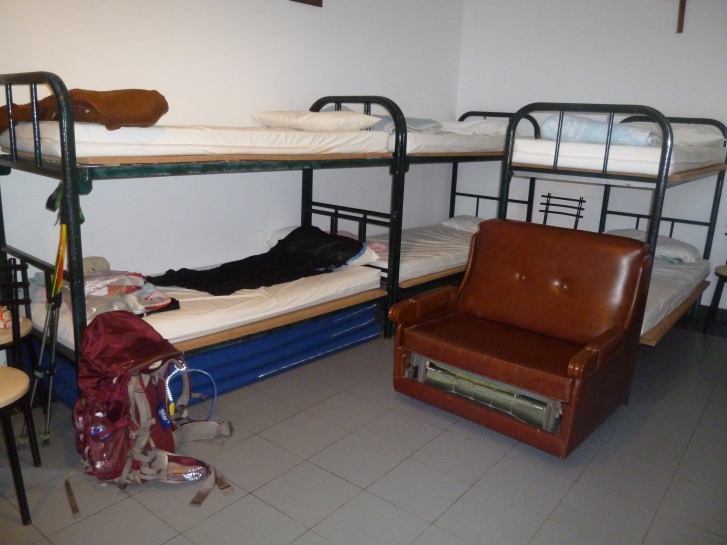 I choose the one nearest the door, give the padre my credenciale and listen while he tries to explain the location of the bathrooms and showers (outside and downstairs), the procedure for washing my clothes, and that dinner will be at 8:30, after Mass.

Eventually Petra shows up as well as a young couple from Valencia, 20-year olds.  She with dreadlocks and he looking like he might barely be 15.  Students in Valencia, they need to be back for class  on Monday.  The priest returns at 8:30 in full regalia from the Mass, carrying a large pot of lentil and carrot soup.  We help ourselves, clean up, and go to bed early.  During the night the rains come down, and of course my laundry is hanging outside.  By the time I realize (at 4:30 am.) that I will need to move the drying rack (a laugh at this point) to a covered area just outside the bedroom, the clothes are more wet than they had been when I washed them. So I wrap them up in my pack towel in the morning and put them, soggy, into the pack.

I had asked the priest before dinner whether he had some honey for my cough, and he took me to the gift shop and sold me a large bottle.  Just what I need to carry with me.  After dinner, he returned to our little hovel with a jar the size of a baby food jar, and I poured some of the honey in the jar so I could take it with me.  That idea lasted one day, and I leave it in Bilbao at the hotel (more on this later).  Seriously . . . all I need is more weight.  The balance of the jar became a donation to the next group of people at the Monasterio.

Friday, September 4, 2015. Breakfast is VERY simple,  Can you guess?  BREAD.  and a bit of marmalata (very good), and some of my own mint tea.  I pass on the instant coffee and instant something else in a jar, and pack up quickly, headed to Munitibar and Guernika.  The road seems smooth initially, through the woods, musty and dank.

Plenty of woods for the woodswoman

At one point I see a group of bicyclers at a fork in the path, with two yellow arrows, one for each direction.  The bikers say the right path is recommended for them because the left path is not good for bicycles, but they think they’ll take the left path anyway.  I look down the left path and it is quite nicely paved, so I choose it.  Apparently the bikers don’t, and I wish I had followed them.  I should know better by now.

The paved path becomes dirt, which is fine, but after all the rain in the past two days, the mud is very slippery and the road dove steeply down the hill.  WAY down.  I know I keep saying it, but this road is not a good thing.  Everyone who passes me talks about how treacherous it is.  One man said, “You’re doing well.  You should hear those Spanish young women behind you wailing about the condition of the road.”  I don’t dare test my balance by trying to take a photo . . . sorry, all.

Well, “those Spanish young women” came along behind me just when I was stuck, with no way down that I could see . . . down off a high mud-step.  Two of the girls go around me and one holds out her hand.  “Do you need some help?”  Yes, ma’am.  Finally the track is over, at least for awhile.  Munitibar is ahead, and I stop at a bar.  The woman makes me a fresh omelette, with tomato and cheese.  Bread, of course, and some mint tea, and I sit for a while.  I’m headed to Guernika and will meet Ria there.

After we see the Museum of Peace we will bus it to Bilbao for the weekend.  Unfortunately, the text at the Museum of Peace is all in Basque and Spanish, and sometimes German, but not at all in English.  I’ve seen Picasso’s original at the Sofia Reina Museum in Madrid and in Guernika there is a copy in the museum as well as one at a nearby park.  A stunning representation of a tragedy of the Spanish people, victims again and again. 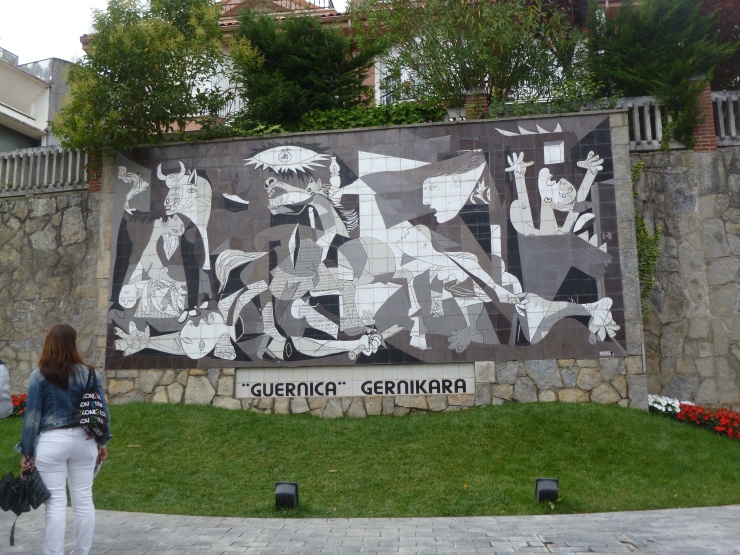 A reproduction of Picasso’s Guernika (or Guernica . . . depending on whose dialect you are using)

By the time we board the bus it’s 5:00, and we have jumped our budgets, booking a room at the Hotel Abando . . . yes, abandoning our budgets for the Hotel Abando.  A great choice, just two blocks from the bus and train station, with very nice men who don’t comment on the fact that these two oldish peregrinas didn’t bring proper attire for Bilbo nightlife. But the cheap Pensiones are all “Completo”.  I tell Ria she can pay whatever she can afford, and I’ll pay the rest.  My crud is not going away, and I need a rest, though a weekend in Bilbao was already in my headlights before I arrived in Spain.  I hope this weekend will help get rid of this stuff soon.  Typically it lasts and lasts, and I do NOT need that.

Showered and changed into one of my three shirts, I get ready for a good dinner.  However, we head to the old part of town, having been warned by the hotel reception man that Spain doesn’t start to eat dinner until 9:00.  We’re on Peregrino Time.  This downtown part of Bilbao is beautiful, with the river snaking through, and walking paths everywhere.  It is truly a walking-friendly city.

One of the first things we see is a theater playing “SISTER ACT, THE MUSICAL”  and I find that hilarious! 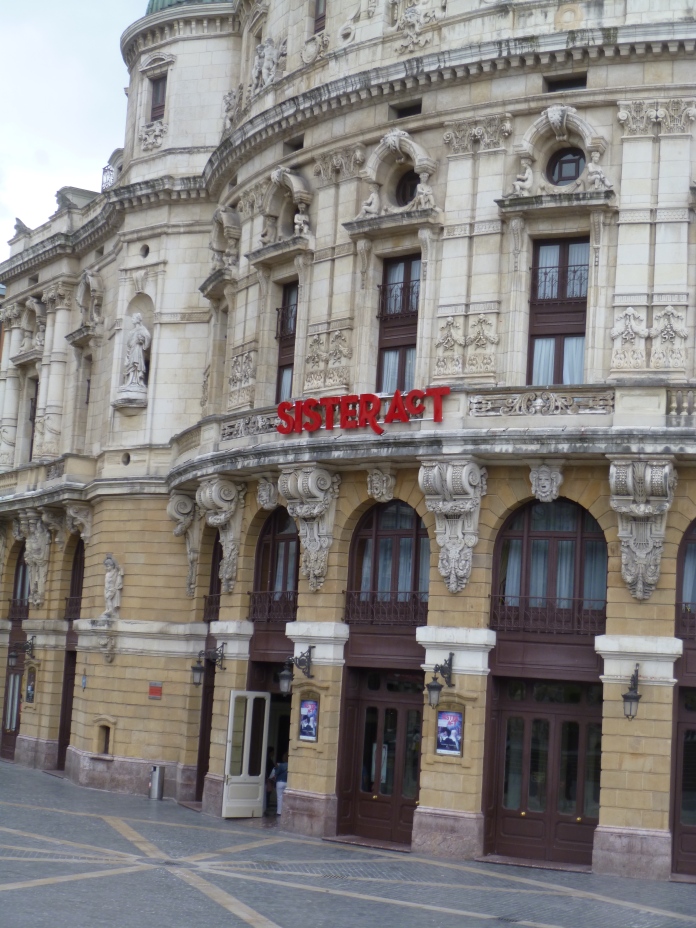 Here is our sweet, perfect white hotel room, before we settle in, then with the hats, and then the packs.  I won’t show photos of what it looks like during the weekend.  We are both “organizing”. 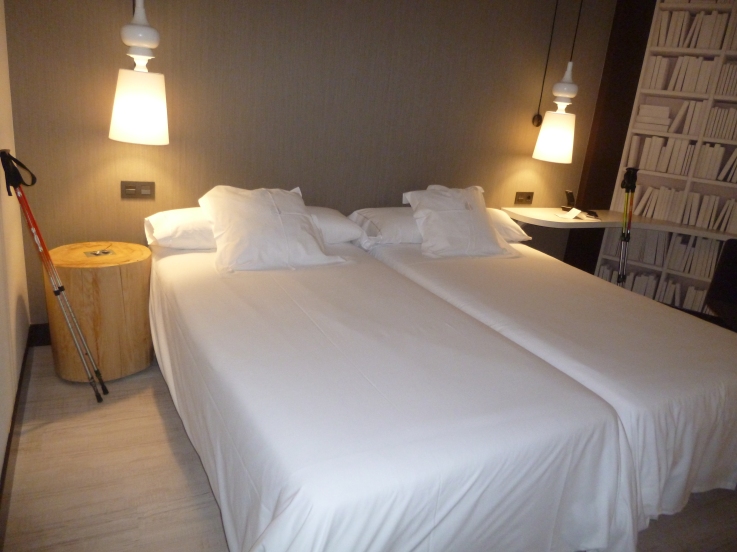 A pristine room at the Hotel Abando . . .but for our poles

And check out the bookcase full of blank book covers on the side wall . . . Looks exactly like a bookshelf of blank books, but it’s ingenious wallpaper . . . 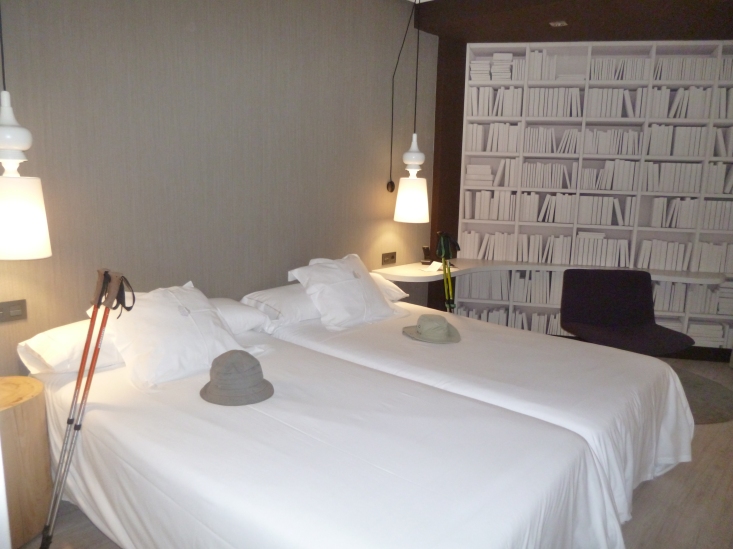 Our minimalist decorations . . . our Camino hats!

Our real settling in begins now . . .

Next come the backpacks

Writer, educator, psychotherapist, woodswoman. Crave solitude and just walked the Camino de Santiago from the French Pyrenees to Santiago de Compostela. Long-term partner, Neil. Three grown kids, one traveling the world for a couple of years (see theparallellife.com), and two in other countries . . . Thailand and Texas! One Golden Retrievers and two cats. Avid reader, looking for 10 more hours in each of my days.
View all posts by Woodswoman →
This entry was posted in Albergues on the Camino, Camino de Santiago, Oldish world traveling, Spain, Women Walking and tagged Bilbao, Camino de Santiago, Camino del Norte, Guernika, Walking in Spain. Bookmark the permalink.