To Noja and Guemes

Up this morning early and out; the “carrot” is the first café con leche of the day in Noja, 4 km from the Blue Albergue.  A fairly large market is being set up in the square next to where we eat our breakfast. 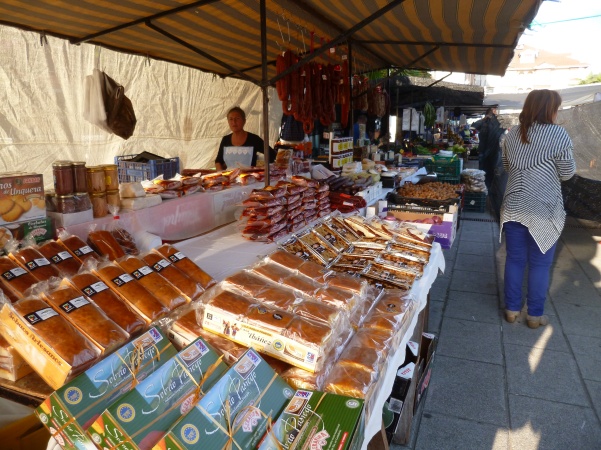 Henrietta has survived her first (and perhaps last) night in an albergue, and is determined to get a pensione or casa in Guemas. I plan to stay in the much-touted Albergue in Guemas . . . apparently it has quite a following.

The day’s walk is either not so difficult or I’m getting used to it. Every once in awhile there are surprise chairs or benches, set out for us, I think.  Green vistas of farmland, cows and sheep and horses grazing near and far down the meadow. I say this often, but seeing the animals as I come around a curve always makes me smile. Somehow it is a healing thing. Dogs, cats, birds, chickens, no matter, but the cows and sheep munching on green grass is fascinating. Do they ever stop? 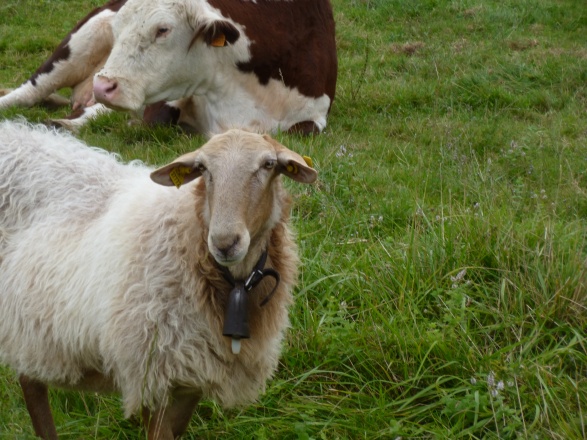 A strange selection of chairs, encouraging us to rest

More coffee at San Miguel de Meruelos, and past the town is a brand new albergue . . . we poke our heads in, but this woman is walking on to Guemas. That’s my goal and I’m sticking to it. It was only a little bit tempting, because the meal of the day at the Meruelos Albergue included both soup (something I’ve been looking for during the past many days) and paella (also not found yet), but it’s only 1:00 and too early to stop.

Finally we get to what should be Guemes, but there is no real town. We ask a woman, “Donde esta Guemes” in my horrible Spanish. Henrietta has none, and makes no attempt. The woman gestures that we ARE in Guemas, but we are in the middle of a field with one house . . . hers. Asking about the Albergue, she gestures off into the distance, so we walk. Soon we get to a couple more houses and a man outside with his dog. We ask again, where is the Albergue. He gestures and says it is a half kilometer down the road. Henrietta tries to find the name of her pensione, and final sees it on her phone. She points to the name and asks the man. In rapid Spanish (I don’t think the Spanish know how to speak slowly), he gestures in a different direction, makes circles with his hands about a church, etc. So we head up the road again. .5 km.

At that point, I’m pretty finished with the day, and I see no albergue. But then there is a sign . . . Albergue de Peregrinos, .8 km. So I’ve walked half a kilometer, supposedly the distance, and now I have nearly another km. Henrietta and I part company, and she plans to take a bus tomorrow to wherever her next leap will be.

I move toward the Albergue sign. Ah, well, and of course it’s uphill. But it supposed to be “magnificent” as the books describe it . . . nearly a sacred little cult following for the owner, Ernesto Bustio, a 78-year old man whose grandparents built the main building 105 years ago for themselves and their 15 children. Ernesto is the only son of the 15th of his grandparents’ children, and is very proud of this place.

As promised in my book, I’m greeted with a cold glass of water and some cookies. The volunteers are SO happy to be here, so I smile and try to be “tranquilo.” The man who shows me to my room is kind, and I am in the main level, with two sets of bunks and my (our) own half bath! Excellent! Later I am joined by a young German couple, Andreas and Anna, and another young woman whose name and country I do not know. 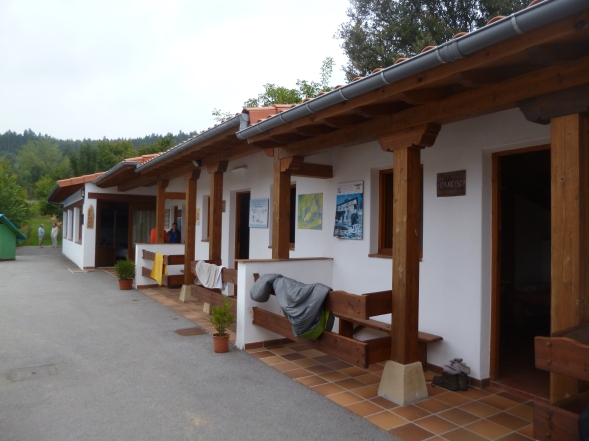 I’m in this row, the one with the open door, at the Albergue de Peregrinos in Guemes

Before we eat dinner, all 50+ of us, we are called to gather in the “library” and sit in a big circle while Ernesto proudly explains his heritage, the history of the Albergue building, and the four philosophies of this place (that is, the four philosopies of Ernesto). Environmental, spiritual, historical, and the negative effects of technology on our minds. There is a man sitting next to him, one of the peregrinos staying here, who translates into English and French every few paragraphs. Thus this little introduction takes more than an hour, and we’ve all walked miles and miles, and are very hungry.

Ernesto talks about his grandparents, the family dedication to offering lodging and food to the pilgrims, and says we should donate responsibly to the “Donativo” box in the dining room. I’m happy he stresses this, because apparently some pilgrims think “Donativo” means “free” for them, and the albergues can’t even sustain themselves.

Ernesto describes the greedy developers, and the ones who bring the eucalyptus forests to Spain, so they can make more paper from the trunks.   The eucalyptus trees, though I love to look at them and smell their scented leaves, are a blight on the native growth of the Spanish hillsides, and it is sobering to realize that between the Eucalyptus and the pampas grasses, Nature is having a struggle, though I can’t explain any of the details. In the midst of speaking on the woes of the mind caused by technology, his cell phone rings. No one laughs out loud, out of respect for this lovely man, but I can hear all of us bursting out in our minds . . . such a disruption right in the middle of his passionate discourse about the demise of . . . etc. etc.

After his speech is finished, we all head to the dining room where there is . . . SOUP. Delicious soup, and some sort of okay penne pasta in tomato sauce with bits of chorizo. Andreas and Anna sit next to me, and when Andreas hears that I am writing, he asks whether I write like T.C. Boyle. I laugh and say, “Don’t I wish . . . “ and he tells me T.C. was in Germany last year, and Andreas went to see him. I tell him about Fort Collins Reads and write down Chris Bohjalian’s name and the title of our book for this year. A nice conversation, for sure. Andreas asks for my website information and I give him a card, asking him to please e-mail me when he gets home so I can have his information as well.

After dinner, I check on my clothes in the (oh, yeah) DRYER, fold them happily, and go to bed. Tomorrow I can either take the short way to Somo or the longer coast way. More beautiful, and 5 or 6 km longer. I think I will choose the coast. 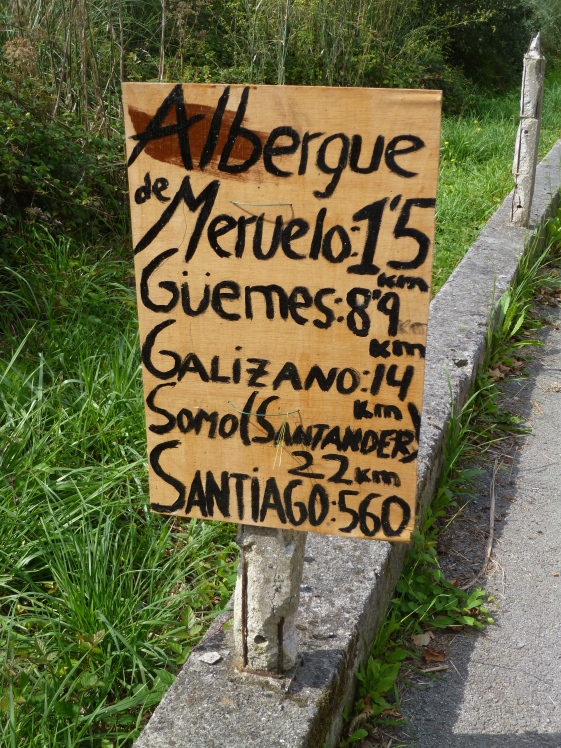 Fill up our water bottles here

Eucalyptus groves along the pathways

Ernesto Bustio, the proud owner of the Guemes Albergue . . . built 105 years ago

Writer, educator, psychotherapist, woodswoman. Crave solitude and just walked the Camino de Santiago from the French Pyrenees to Santiago de Compostela. Long-term partner, Neil. Three grown kids, one traveling the world for a couple of years (see theparallellife.com), and two in other countries . . . Thailand and Texas! One Golden Retrievers and two cats. Avid reader, looking for 10 more hours in each of my days.
View all posts by Woodswoman →
This entry was posted in Albergues on the Camino, Animals, Camino de Santiago, Ernesto Bustio, Eucalyptus trees, Guemes, Spain and tagged Albergues on the Camino, Animals, Camino del Norte, Eucalyptus forests, Guemes, Street Markets. Bookmark the permalink.

8 Responses to To Noja and Guemes

Two Old Horses and Me
Writing For Peace