Sunday, September 13, 2015.  I wake up in the crowded Albergue in San Vicente and do the usual . . . take out the mouth guard, brush teeth and face, pack up the backpack and get ready for the road again.  It is pouring outside.  Ria says she does NOT want to start her day in the rain.  I suggest we find a bus partway to our next destination, and we might escape the rain, substituting wet for a nice walk to Buelna.  We table the decision until after cafe con leche, included in the albergue’s cost for the night.

In the large eating room, our hospitalero, Julién, is in the kitcheb, preparing coffee, steamed milk, tea water, toast, marmalata, all while singing “Love and Marriage” ala Frank Sinatra.  I can’t help but sing along from the dining room.  We both know the verses and chorus (Carol Hodges, you will understand this best!), and the surrounding peregrinos look up in astonishment (or dismay) while the English words come from two rooms, as though in awkward stereophonic sound.

Julién delivers his plates of toast and laughs with me.  He says he loves the old American songs by Sinatra, Nina Simone, and others.  We move to Nancy Sinatra, and sing a bit of “These Boots Are Made For Walking”, so appropriate in an albergue full of walkers.  As we sing, “One of these days these boots are gonna WALK all over YOU”, Erika, the adorable young woman with the infections laugh comes in and . . . laughs.  But then she sits down to tape her aching knee.  She doesn’t know whether she can walk today, and Ria says she could take the bus as far as she needs to go.  Erika begins to cry and says she would be so disappointed in herself if she took the bus.  We ask her the questions we’ve been asking ourselves.  Is your body’s health worth putting it at risk so you can appear stronger than your limbs might be from one day to the next?  She’s a physical therapist, so we ask what she would tell her patients.  Would she tell them to just push on and ignore their pain?  No, she would not.

We are headed to Buelna, to a newly remodeled Albergue, and Julién says we can take a bus to Unquera (about 10km from San Vicente) and then walk to Buelna, a very manageable day of about 12 km.  Adriana joins us and we all walk DOWN, DOWN, DOWN to the bus stop.  Four of us approach the stop and see three men with backpacks waiting already for the bus.  Laughing, we ask one of them to take our photos . . . we, the four invincible but careful, peregrinas. 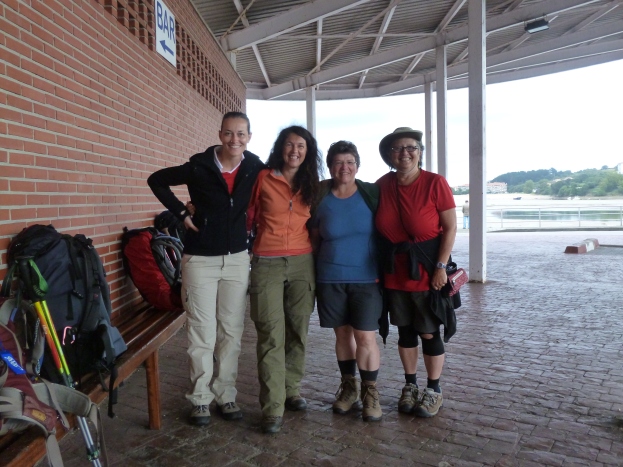 When we disembark in Unquera, the rain has stopped and we look for our shells and arrows.  Ria takes off at her usual slightly-faster pace, and I tell Erika I will walk with her so she will be sure to walk slowly.  She laughs, of course.

It’s such a beautiful walk and we know we have three reservations for lower bunk beds at the albergue in Buelna so we are in no hurry, though we will reach our destination mid-afternoon.  We also know that our bed fee includes dinner and breakfast so we don’t have to do anything but walk happily and settle in for the rest of the afternooon and evening, without having to look for a place for dinner.

I pass donkeys today.  Adorable donkeys, and one of them takes a liking to me as well.

An old woman stands outside her house, knocking fresh figs off her tree and gathering them into a basket. She offers one to Erika, one to me, another to Erika, another to me.  I’m sorry I didn’t take a photo of her and her offerings.  But here is the kind of countryside surrounding us today, as well as on many other days . . . 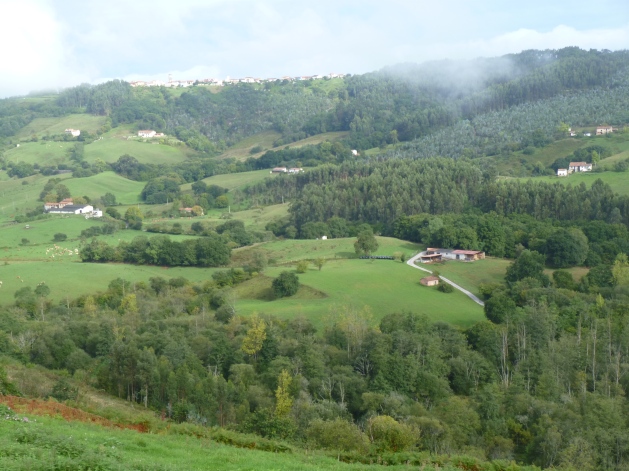 Adriana talks, almost to herself, about not feeling ashamed for going slower.  We are both grateful for our hiking sticks on these rocky and uneven paths, and she says the man she was walking with, the one who pushed her to do 30km per day, also told her she shouldn’t be using sticks . . . that she should instead be developing better balance.  This guy sounds like a first-class asshole.

Then she again mentions the kind man on the beach at Comillas and says she also saw him in San Vicente when she arrived yesterday.  She had gone down to the beach and he called to her from an outdoor bar table, and invited her to have something to eat with him.  She mentioned his name . . . Larry.  Could it possibly be the world is so synchronistic?

I ask her whether this Larry has dark hair and a salt-and-pepper beard.  She said, “YES!”  And did his wife die a couple years ago?  “Yes, and he’s a carpenter . . . “.  Ah, yes, my kind friend Larry . . . and of all the pilgrims, these two met up in the very town where I was staying.  Too strange!  I send Larry an e-mail and tell him I am walking with Erika, the woman he met twice in the past two days, that we are staying in Buelna for the night and hope we run into him at some point soon.

Still shaking our heads at this serendipity, we come to an alternate path, and Erika says she wants to walk the coastline, that she promises she will go slowly, and that she will see me in Buelna.  We wave goodbye to one another, and I take off on the primary path.

In Buelna, Ria has already washed her clothes and they are hanging on a line.  The hospitalero has settled our three reservations into a bunk room of our own with our own private bath and shower.  Not quite so well-thought-out, the shower curtain comes about three inches above the shower pan, so the water goes all over the floor, but still feels SO good after a day’s walk.

There is a bar and restaurant attached to the Albergue so I order myself a can of Kas Limón (not sweet like soda, just right tart, like seltzer with lots of lemon in it) and an ensalata mixta, as usual full of tuna, eggs, tomatoes, white asparagus, shredded carrots and lettuce.  You’ve seen the photos in the past, and I don’t have another one for this particular ensalata.

Finally Erika comes, refreshed from her coastal walk and ready to give her knee a rest.  It rains and then stops, rains and stops.  Ria takes her clothes off the line and puts them back on, off and on, as the sun comes and goes.

At dinner, we have a wonderful mix of people at our table.  Eight countries are represented, peregrinos seated at eleven chairs.  France, Spain, Italy, Germany, Switzerland, United States, Belgium, and Holland.  We cobble together conversations and delight in the mish-mash of words, both understood and not, all through dinner.  The Italian man asks whether I know any Italian, and I tell him I know much more Italian than Spanish, but that’s not saying a tremendous amount.  So he talks with me in slow Italian (something the Spaniards do NOT know how to do), before letting us all know that he has only 100 km to go before he has to return home, and that he can do that in five days.  He very well can.

After a bottle of wine and dessert, I’m again ready for bed.  So I go, with pictures of solo tile-roofed little buildings in my head.

One of my favorite scenes on the path . . . a little building on the edge of a village, where I could live out my days . . . if only it were in Italy!  Room for Neil as well . .