Rain.  Rain.  Rain.  And more rain.  Lots of upright camels leaving Arzua after they collect in one of the only early-opening bars in town.  I get my usual croissant and cafe con leche before I put my own navy blue camel outfit on over the burgundy backpack.  Lines of colored camel-backs trudge out of town, gripping sticks so we won’t slip on the slick cobblestones.  We don’t realize we will soon need our sticks to pole-hop over puddles that get larger and more unpassable as the hours go by.

Multicolored upright camels begin to negotiate the “roads”, soon to be small rivers after all the rain the past few days

At the first bar, about 6 km down the road in A Calzada, about fifty of these camels crowd into the medium-sized room, desperate to get out of the rain and wind, often blowing sideways.  The wait-staff distributes cafe-con-leche and food at breakneck speed, trying to keep up with the orders from the wet masses.

They exit the bar into the gale, and I take Francisco’s seat.  No hurry . . . I’m going 17 km today to a private albergue in Santa Irene, where I have already reserved a single-non-bunk bed in the corner of the sleeping room, just like I did two years ago.

Returning to the trail, I find strong winds and sideways rain, and the roads are becoming very difficult.  Here is where the hiking poles take on a new job.  Getting me across these ankle deep rivers.

For some strange reason, the rain lessens abruptly, as I stop again at the next bar, less than 2 km away.  A darling puppy greets me, licks my fingers, jumps up on my legs, and runs around as though I’m her new owner.  I walk into the restaurant and she almost follows me, but as her paws touch the threshhold, she stops.  Already she knows her boundaries, so she begins to run around the patio area, where today there are only chairs and tables but no people.

The menu lists Caldo Gallego, a Galician “broth” made with kale, white beans, often potatoes, and sometimes cabbage (my favorite part when I can get it).  This is the regional dish I loved most on my first Camino, and but for the waterfront restaurant in Ribadeo, I haven’t had any yet.  I order a bowl, and the man goes out to another part of the building.

Soon an old woman comes out lugging a huge covered pot, and slowly goes into the kitchen behind the ordering desk.  Good.  Soup.  Now.  But not now.  15 minutes goes by, the old woman stirring her cauldron in the back, and I can only see part of her head and upper body, her arm moving a giant wooden spoon in circles.  I ask the man.  “Sopa?”  He makes a “wait” motion with his hand.  “Tranquillo,” he says.  Okay, I’ll relax.

Another 10 minutes, and I look up again.  He nods with the same hand motion.  Finally, he brings me a steaming hot and very large bowl of my Caldo, brimming with cabbage.  Oh, my god, the best I’ve ever tasted.  He looks at me, questioning.  I beam.  Worth the wait.  Wish I had taken a picture, but the rain made my brain soggy.

The sky opens again and another deluge begins,  I don’t see the puppy.  I ask the man, “Donde esta pequeña cane?”  He smiles and nods.  “No problemo.  Pequeña cane in la casa.”  Ah, the puppy is in the house.  Good.  I wondered where she could possibly have found shelter in that wind and sideways downpour.  Now the thunder begins.

A group of four peregrinos enter.  I tell them the soup is delicious.  They order and go through the same thing with the man about the long wait.  I tell them it will be worth it when the soup arrives.  One woman who speaks English begins to talk about a taxi.  Her English is excellent, so she might be German, Dutch, Belgian, Swiss, or perhaps actually English or American.  The bar owner says he’s the taxi and he will take her and her companion to Pedrouzo, about 10 km. away.  I am not going that far, not quite, but if the thunder and rain continue, I’d like to go with them,  just to my place in Santa Irene.

The wind nearly blew some people over as we walked earlier today, and I’m so sticky and wet, I’d like not to get myself soaked.  The ponchos are great, but when the rain is sideways and the wind is blowing, the ponche nearly comes up over your head, and everything is soaking wet.  I ask the woman if she would mind my splitting the cab fare three ways with her and her companion.  No problem.

In about 10 minutes, I show the man the private albergue to which I’m heading, and tell him he can drop me off nearby.  No need to turn around in the middle of the road and get me to the door.  The rain has let up again and I walk the short distance to the familiar building, step in and take my poncho out to a covered patio in the garden, put my boots in a little room with a stack of newspapers so I can stuff my shoes.  I just learned yesterday that newspapers stuffed into shoes sucks some of the water out of the inside of the shoes.  Interesting tidbit.  Almost too late now, since I only have a short ways to go to Santiago.  But still . . . maybe for my next Camino.  (WHAT?)

Same ritual . . . get settled in, connect to the wifi and begin to write.  People slowly gather throughout the rest of the afternoon, and I meet a couple from the States.  She from Minnesota, and he from Mexico, but married to her for 27 years.  Laurie and Salvadore. I hear some of their story, and they hear a bit of mine.  But they won’t be eating dinner here.  They are running out of Euro and this dinner (13 Euro) is too expensive for both of them.

A group of French people sit at one table playing some sort of card game.  For several hours.  At 8:00 we have our dinner and they stay together at their table.  “My” table has an Irish couple, Tracy and her husband, whose name I never got, an Englishman living in Dublin, an Austrian woman and a woman from Spain.  And me.

And set in front of each of us is a plate worth a photo: 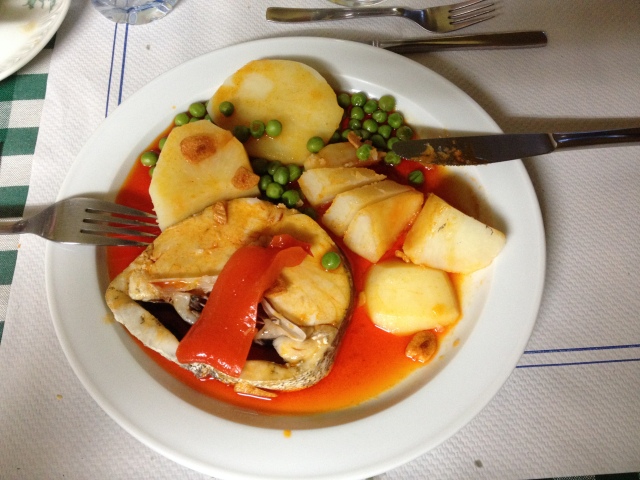 Hake (a fish) garnished with red pepper, boiled potatoes (at least they’re not french fries), peas and a sauce. Delicious, but I leave the potatoes 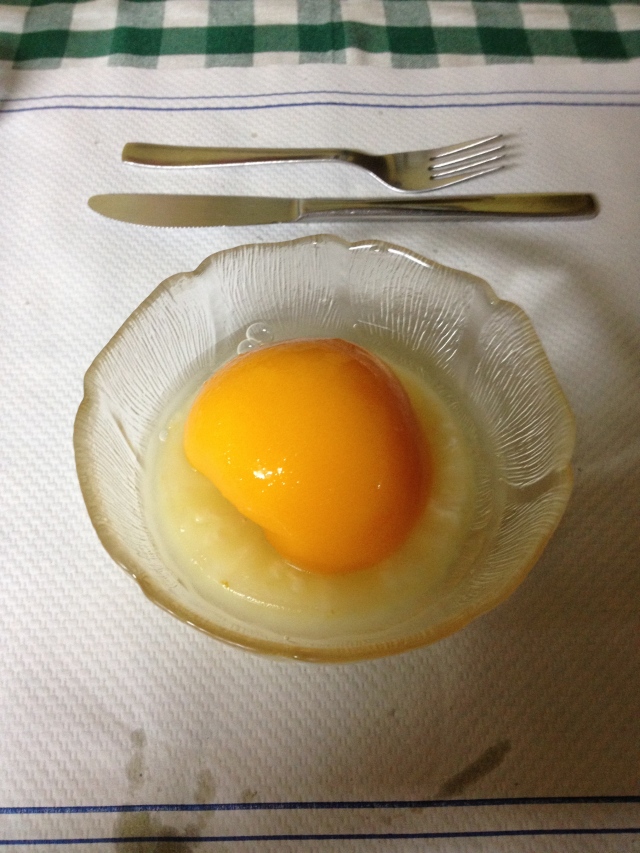 Dessert . . . a peach half (canned, I’m sure) in sweet sauce. Looks like a freshly cracked egg, doesn’t it?

After dinner, same old same old.  A bit of conversation, some preparation for tomorrow’s walk, a bit more writing, and then bed.  I’ve signed on for a small breakfast.  Coffee and bread.  Didn’t want to have the bigger breakfast for twice as much money.  Coffee, juice and bread, cake, and  cookie or some other type of bread.  I’ll get something else along the way.  Maybe a salad again.  So I tiptoe into the sleeping room, where most everyone is already tucked in.  Step up to my platform single bed (like a princess alcove, says one of the women) and try to sleep.