To Santiago de Compostela – The Walk In

Okay, today’s the day.  A short walk, less than five km, and I will be at the foot of the steps to the Cathedral de Santiago de Compostela.  No breakfast at the Polish albergue today, so I head to the closest bar, and Laurie and Salvadore will meet me there.  This bar has the best bread I’ve tasted on the entire Camino, round soft loaves, and I buy two of them to take with me, as well as consuming one with cheese and prosciutto (serrano ham in Spain) for breakfast.

Laurie and Salvadore do the same, and then we begin.  Almost immediately the path takes us through ugly, bugly areas . . . literally a walk over an interstate, and into the industrial area of Santiago.  Then the outskirts with lots of banks and gas stations and electrical parts store . . . not at all like either of my Camino paths, but certainly typical of a large city.  Gotta get through the ugly to get to the historical, at least in European large cities.

On the Camino Frances, the strong recommendation from John Brierley’s book was a bus through the entrance to Burgos and Leon, and even on the Norte, getting out of Bilbao and Gijon was ugly, with recommendations to take the metro from Bilbao to Areeta/Portugalete and a short bus or taxi out of the worst part of industrial Gijon.  But for the Santiago last march it’s just unthinkable to taxi in when we’ve all walked so far and for so long,  So here we go.

It really only takes about 90 minutes to get into some semblance of the old city, and this year, I’m not greeted with yellow construction barriers blocking off the real entry to the Cathedral.  Laurie and Salvadore break away from me at the turn for the Seminario MENOR (not my Seminario MAYOR) and we agree to meet later this afternoon at a designated place I know, just down from the office where we will all get our Coomplstelas, the certificate of completion for whatever Camino each of us has walked. 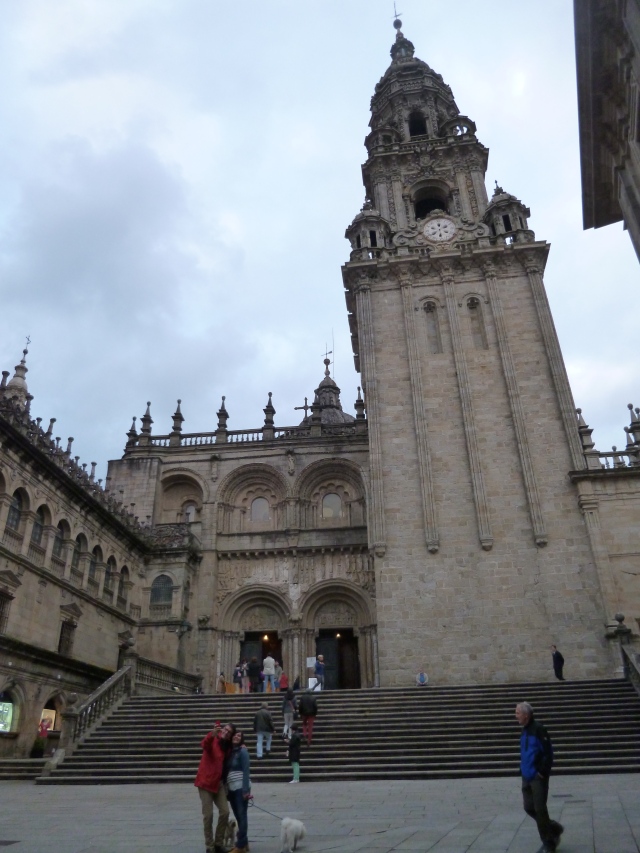 A good glimpse of the Cathedral in Santiago 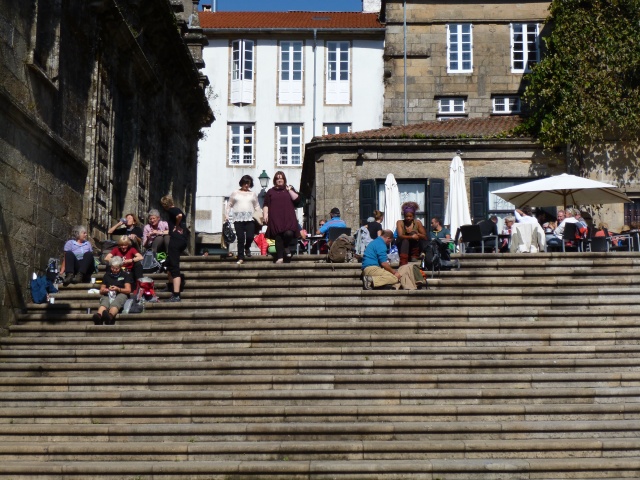 People gathering along the side steps of the Cathedral. At the top, a bar with outdoor tables . . . feeding the arriving masses

The stiff, kneeling supplicants are still around the Cathedral.

Some of these kneeling beggars even have a backpack or a blanket folded nicely under their knees.  Here and there a morose old woman with a black cape and babushka, holding out a paper cup, shaking it, saying in a dolorous voice, “Por favore . . . por favore . . . ”  And the wandering street beggars, most of whom are fairly well clothed, are everywhere, more intrusive, often coming right up to you in an almost intimidating manner. A shame.  Just as everywhere else, you can’t tell which ones are truly suffering and which ones go home to the quantities of money they make from these forays.

I give money to street musicians but not to beggars.  At home, I am gathering the habit of taking a sandwich and a bottle of water to people who claim they have nothing to eat.  The truly homeless are grateful for the food and I feel better than giving the a bit of money, frankly.  But the kneeling ones don’t have signs.  Just a long stiff frame and two hands out for money.

The line at the Pilgrim’s office is long and out the door curling around the Via do Vilar.  I decide to wait until tomorrow or later tonight when the line is shorter.  Wasn’t even sure I would get a Compostela this year.  I have one, and my Camino Credenciale, with all the stamps, is again the most important to me, but now I have a second.  Actually a third, because someone told me about a St. Francis of Assisi Compostela, commemorating the 600th or 800th anniversary of St Francis’ walk into Santiago.  I walked on a stone sidewalk behind my Seminario to a lovely church of St. Francis, down the long inner pathway on the left side of the pews to a sign that said “Sacristy”.  There was an old priest, delighted to have a visit from pilgrims who have heard about this particular compostela.  He sits for two hours in the morning and two hours in the early evening so he can give these special certificates to those who come looking for them.

First tasks are to pick up the things I mailed to myself a few weeks ago.  I find Ivar Revke’s office, and pick up a box of items I decided I could live without . . . the things I mailed from San Sebastian on August 31.  I discover that Ivar and his wife lived in Fort Collins for two years and worked at CSU.  Small world.

Next I go to the Correos, the post office, and get a small blister pack I sent Castro Urdiales on September 7.  Easy, and I’m relieved.  I take my packages back to my little monastic room and go out into the old city again.  Now I wander the streets and I’m surprised by how much I remember from last time.  The shabby old Hospidale Santa Cruz, where Ria and I stayed the first two nights we were in Santiago two years ago.  Another bleah . . . nice old man who runs the place, but a depressing set of rooms and a very old bathroom down the hall.  Not any more for me.

A favorite bakery, the little grocery store, a restaurant where Cristel, Ria and I had lunch two years ago, etc.  The bagpipes being played in the tunnel from my side of the Cathedral.  A variety of street musicians.  And more of those kneeling supplicants scattered around the blocks.

I meet Laurie and Salvadore a bit later than we had planned, but they seem to be the kind of free spirits for whom time has a wiggly meaning.   We return to “my” Seminario, sit in the common room and have a coffee, a beer, and Salvadore has his favorite, a glass of cold milk with a half glass of orange juice poured into it.  BLEAH!  He says it’s delicious and a Mexican tradition.  Maybe one day I’ll try it.  But I’m surprised the milk doesn’t curdle immediately when the orange juice hits it.

I have food in my pack, left over from the most recent “no food” days, and I have bought a pack of ham and a pack of cheese in the little grocery store.  For dinner, I stay in the Common Room, practically my living space for the next few days, and have a glass of wine from the bar and my ham and cheese with the fabulous roll I bought this morning.

Writing in earnest now, though I’ll soon find that with a full house at this residence, the wifi will prove slower than useful.  But at least I can write on my Word doc and add photos later.  First night after the long haul, nearly six full weeks, even with the distances I skipped.  My body knows I put in at least 400 hard km, and another 150 or more that were not so hard.  Fewer total km this time than last, but four times the effort for at least half of it.  So I bow to myself in the mirror. 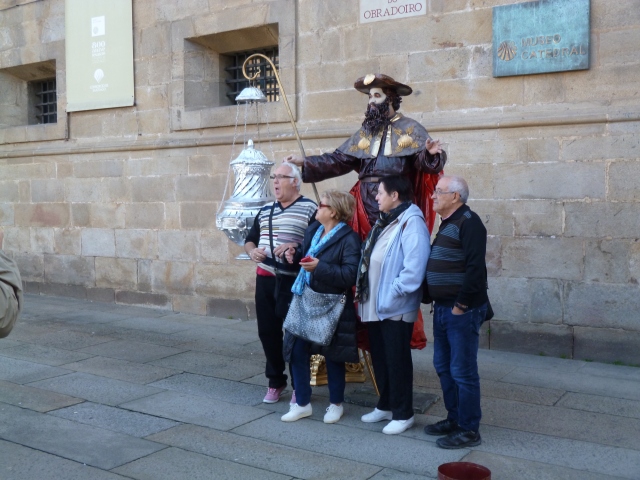 One of several ‘statues” around the Cathedral, drawing pilgrims, tourists, and money

6 Responses to To Santiago de Compostela – The Walk In