Friday, September 21 – Ria, Michael and I, along with the other Albergue guests, walked out early today in deep fog.  62 degrees and 99% humidity. A common theme for the coast, I guess. The paltry breakfast at the Albergue didn’t look inviting, and we were locked out by 8:00 anyway, so tromped in a small group to the bar promised to be about 1-2 km down the road. Another exciting breakfast of “Toasta” or croissant, fresh orange juice and tea.  Where oh where are my eggs, for breakfast, not for dinner??

Then on to the next bed, near Nigran, I think. I made the reservation so I know we HAVE a bed, but one can never tell exactly what town it is in.

I realize I’m good for about five hours of walking these days, typically, or 10-12 km, whichever is hottest. This isn’t easy once the fog lifts and the temperatures rise, but it’s been okay so far, with my turncoat taxi help.   Today the path heads up into the words for awhile and over a “mountain”, though from sea level, it’s only 170 meters . . . a bit over 550 feet. The pack feels alternatively lighter and heavier as I walk the rocky path up the mountain. Some shade occasionally and I sit against a rock, trade shoes for sandals, and read more of my Kindle book on my phone. 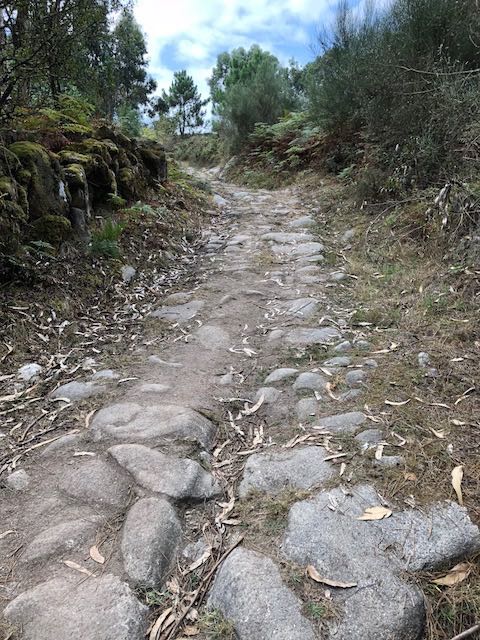 Pilgrims pass me by and nod. At some point, two woman stop. “That looks like a good plan”, one of them says, and they take off their packs and after a few bits of conversation, sit down next to me. So much for reading, but these women are fun to talk with. Soozie, from Australia, will meet her friend from England (not a walker) in Baiona, the next town. The friend has flown in for Soozie’s 65th birthday, and has reserved a room at the Baiona Parador.   Such a friend!

The other woman, Terri (Terry?), tells me this is her first time out of the States, and that she has been taking care of her disabled sister for the past TWENTY TWO years!! A sister-in-law (I think) is taking care of the sister while Terri has her first passport adventure. I don’t ask where the brother or other relatives are in this caretaking solo assignment. Terri and Soozie have met on the trail from a day or two ago, and Terri has decided to book her own Parador room. I don’t think I would splurge on a Parador in anywhere but Paris or Florence, but not sure I would spend that kind of money anyway.

Are we again on the “Old Roman Road”?

Another 15 minutes and we are all back up the hill. The shade and breeze are helpful, and after an hour or so, we finally think we are in Baiona, but no, another 3 km, says a man walking by, and up up up a hill with no shade.   I am not headed for Baiona as my stopping point, so we split trails eventually, and now I’m on pavement, a street, with no idea how far it is to the Hotel Avenida in, supposedly, Nigran. Mid-afternoon, with a very real concern that I might just pass out on the road. No drama here, but no bars, no cafes, no nothing,

And even if I could call a taxi, I have no idea where I am, with no town or road markers to help indicate my position.

After about an hour, I see a taxi going the opposite way and flag it down. I explain my predicament, and though the driver has a passenger, he waves three fingers at me, and drives off. Sure enough, a bit less than five minutes later, he is back again. I tell him where I am going and he shakes his head. Finally he calls the number of the hotel and tells me it is in Sebarís. Not helpful, but at least someone knows where it is. Another seaside town, darling down, with the kindest hotel owner named Manuel.

He tells me his wife, my age, walked the last 100km of the Camino Frances, from Sarria to Santiago, in THREE DAYS. Why? I ask. He just shakes his head. He says, “She doesn’t do that anymore.” Asks how I am, do I need some cream, are my feet all right, etc. Gives me the keys and I go to my room to wait for Ria.

When she arrives, we go next door to a grocery store, get some fruit and water, and find a café. Vino tinto, por favore.  Researching restaurants on Trip Advisor, which I am sure the pilgrims of 1000 years ago wished they could have done, I find that one of the highest rated restaurants in the area is just down the block.  Fidalgo. Mediterranean, Spanish, Tapas, etc.  No pictures, but a varied paté plate for me with local cheese and marmalade.  Different fare than I’ve had on this trip so far, and I welcome it.

Ria recommends that we take a bus leap tomorrow, so we can skip an apparently very large and fairly ugly city, Vigo, which means a bus to Vigo and then a transfer at the bus depot, on to Redondela.  The bus stop is just outside the sea-side entrance of our hotel.

I secure what I am told is a private room with two beds and a private bath in Redondela, at Casa d’Abreu.  Hear the “I am told” part.  We think we are set.  And we have a good sleep tonight.  Still beautiful flowers all around . . . 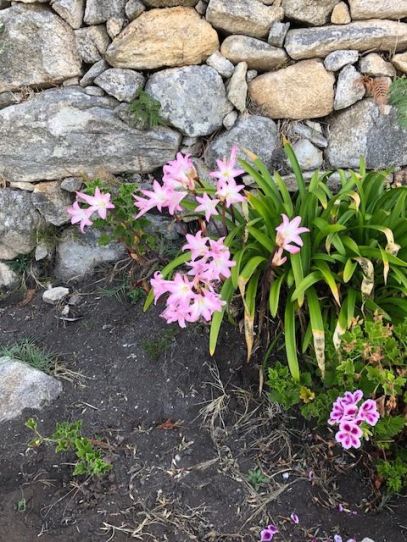 Writer, educator, psychotherapist, woodswoman. Crave solitude and just walked the Camino de Santiago from the French Pyrenees to Santiago de Compostela. Long-term partner, Neil. Three grown kids, one traveling the world for a couple of years (see theparallellife.com), and two in other countries . . . Thailand and Texas! One Golden Retrievers and two cats. Avid reader, looking for 10 more hours in each of my days.
View all posts by Woodswoman →
This entry was posted in Camino de Santiago, Spain, Women Walking. Bookmark the permalink.

Two Old Horses and Me
My Life After Kids

Two Old Horses and Me
My Life After Kids