NOTE:  Another fu-bar . . . an earlier version of this write posted itself!  So you will get an amended one now, and if you try to read the other one, you will get a message that there is no such thing, I guess..  Sorry for that.

Thursday, October 8, 2015.  Well, I got my Compostela and I still value my Camino Credentiale so much more.  Here is how my walk on the Camino del Norte is represented with the sellos (stamps) I collected along the way:

Yesterday I picked up a little flyer for a Foot Reflexology place.  Just what I had promised my feet all this time.  I also got a map from the Tourist Information office, with a location for a real laundromat.  Since I can’t seem to upload any of my photos to my WordPress website, I might as well wash my clothes.  The location is between the Praza de Galicia, a major bus stop, and the train station.  I’m familiar with both, so it’s easy to find.  While my clothes are washing, I go next door for, what else, a cafe con leche.  And I try the photo thing there, hoping it is just the Seminario Mayor’s wifi, not my computer.  The photos go wherever I want them to go, zip, zip, zip.  Sigh of relief.

Friday, October 9, 2015.  Laundry done, I try to find the reflexology office, and after a bit of confusion, I make an appointment on the phone with an Italian woman for later this afternoon.  And it too is very close . . . right around the corner from the street where all the information offices are located.  So back I go to my room, unload my now clean and dry laundry, all of it but the minimal stuff I am wearing.  On the way back to the reflexology appointment, I step into a little bookstore and peruse the shelf with the English language books.  An Agatha Christie catches my eye.  Never did read any of her stuff until our Couples’ Book Group read And Then There Were None earlier this year.  So I selected The Death of Roger Ackroyd and another that looked interesting by Lily King called Euphoria.  Turns out this latter was one of the five best fiction books of 2014 selected by the New York Times.  Good enough endorsement for me.

I have a Kindle app on this computer and on my phone, but I wanted to read a really easy book, and Christie fills that bill.  I suspect I’ll finish it in a day and pass it on to Ria, who likes to read books in English.

Funny, but I am not inclined to hang out with the hoards of accomplished pilgrim in the “Pilgrim House”, where you can have tea, reflect on your insights, pray together, etc.  The tea is my “cup of . . . “, but I can do that on my own.  So I bought the books . . . and when it’s time for me to have my reflexology appointment, I walk back over to that part of the town.  Carmen Isabettini is my darling young Italian massage therapist.  Her hands are strong but not TOO strong, so she massages each toe, each part of my foot, and comments . . . “oh, are you having hip problems?  I can feel that in this place on your foot.”  And the same for my chronic neck buzzing.  She asks when she works on another part of my foot, “Neck issues?”

She says, which I know, too, that the pressure points used for acupuncture, acupressure, and reflexology are the same or st least similar . . . our bodies are connected in their parts, no matter what method of treatment you use.  I begin with a 30 minute appointment but when that is finished, I ask for another 30 minutes.  I just want to stay there all day!

Carmen is from Fano, in LeMarche.  Came to Spain and fell in love so she stayed.  I ask whether she is still in love, and she says, “No, but I have a 7-year old daughter, and I’m in love with her!”  Ah, that’s the way it goes so often, yes?  I enjoyed my time with her and wish she were in Fort Collins so I could have regular appointments with her.

Ria is coming back from Finisterre this afternoon, and my friend Laurie D from Fort Collins is walking in to Santiago later tomorrow.  I look forward to introducing them to one another.

Newly finished pilgrims pour up the steps of the Cathedral, through its doors for the pilgrim masses, into various hostals and other collections of accommodations, including the Seminario Mayor San Martin Pinario, my own Santiago home sweet home.

When Ria arrives, soon after noon, she gets settled and we begin our wanderings, much as we did two years ago.  Her daughter’s birthday will be the day after she returns to Germany and she wants to find something non-schlocky for her.  Early evening we attend the Mass at the Cathedral, because Ria wants to see the botofumiero swing again. So do I, and the church is completely packed.  We arrive 45 minutes before the Mass begins and we have to stand in the outside aisle for two hours. But the botofumiero does indeed swing, and it’s very impressive.

For description and a very dramatic little video of a dramatic moment at the end of the Mass, check here.  If you have seen the movie The Way, with Martin Sheen, you will already know what this is:

When the Mass is over, we look for dinner somewhere.  Soup is all we really want, soup and Tarta de Santiago, of course.  Then bedtime.

The breakfasts included with the rooms at our Seminario are sumptuous, compared to the Camino breakfasts I have had for six weeks.  Yogurt, fruit, meat, cheese, fresh sliced tomatoes, cereal, toast and jam, two kinds of juice, and all variety of coffee and tea,  It’s a great value, and if you aren’t staying here, you can still come for breakfast for Euro 5.  Helluva deal. 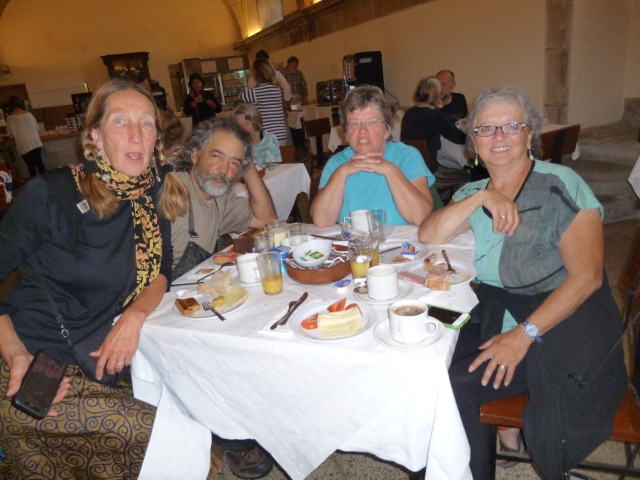 Saturday, October 10, 2015.  Laurie D joins us for breakfast, and we plan to have dinner together tonight at the Italian restaurant recommended by Carmen, the Reflexology person.   In the meantime, Ria and I wander the street full of restaurants that advertise lists of strange shellfish unknown to us.  Two years ago, we took a chance on one of these mystery plates and ended up laughing more than eating, questioning the origin of each of these things.  Elephant toes?  Etc.  Now we are at the front of “our” past experimental restaurant, and at least we will take photos, though we agree we won’t venture into that culinary mystery again. 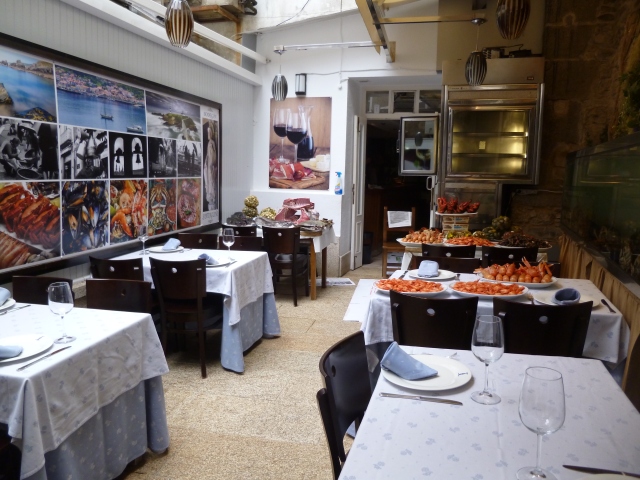 Ria and Laurie D – Dinner at an Italian Restaurant in Spain!

The Cathedral at night, though my photo doesn’t do it justice.

Sunday, October 12, 2015.  I visit a free Ramon Sanchez Estalote Photography exhibit, just across the street from the Cathedral.  Ria had gone yesterday and she highly recommended it . . . reminds me of the Vivian Maier documentary.  Real people living real lives in the first half of the 20th century in Santiago.  Candid shots in the streets . . . wide variety of images.  You can google him if you’d like, and you’ll get some images, but I can’t put the translated links here for some reason.

But while I am on the third floor of the exhibit hall, I look out the window toward the Cathedral and take some of my own candid photos . . .

A mass of umbrellas grows and grows . . .

I wonder who lives behind these windows?

I have another 36 hours in Santiago before I shift my body and emotion to Italy!  Soon . . .

Writer, educator, psychotherapist, woodswoman. Crave solitude and just walked the Camino de Santiago from the French Pyrenees to Santiago de Compostela. Long-term partner, Neil. Three grown kids, one traveling the world for a couple of years (see theparallellife.com), and two in other countries . . . Thailand and Texas! One Golden Retrievers and two cats. Avid reader, looking for 10 more hours in each of my days.
View all posts by Woodswoman →
This entry was posted in Miscellany and tagged Last Camino Days, Santiago de Compostela. Bookmark the permalink.